Difference between revisions of "D'ni time" 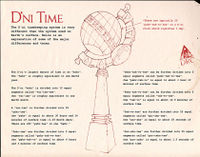 The hahr (<d'ni>har</d'ni>) is the largest known quantity of time on the D'ni calendar. It is roughly equivalent to one year in the Gregorian calendar.

A vailee (<d'ni>vAIlE</d'ni>) is roughly equivalent to a month. There are 10 equal vaileetee in each hahr. Their approximate respective dates on the Gregorian calendar are:

Every yahr is divided into five equal segments called gahrtahvotee. Each gahrtahvo (<d'ni>gartavo</d'ni>) is equal to about 6 hours and 3 minutes. Aitrus's watch illustrates gahrtahvotee as segments with varying degrees of brightness.

The pahrtahvo (<d'ni>partavo</d'ni>) is the D'ni equivalent of the hour measurement in solar time — 1 hour 13 minutes, to be more precise. Each yahr contains 25 pahrtahvotee; accordingly, each gahrtahvo contains five pahrtahvotee. This is also the unit of time that is referred to as "nth bell" in the Book of Ti'ana. The clocks found in many D'ni neighborhoods also use this division of time. Older official descriptions of the D'ni system did not mention this unit, and merely described the gahrtahvotee as being divided into 25 tahvotee. Most, if not all, explorer-written D'ni clock programs still rely on this older description.

During the course of Mysterium 2006, RAWA revealed that the length of the D'ni year is equivalent to the precise number of seconds in the Mean Solar Tropical Year in 1995. In October 2007, he revealed in correspondence to explorer RIUM+ that the exact value is 31556925.216 seconds, or 365.24219 days. RAWA also disclosed the day and time at which the D'ni and Gregorian calendars converged exactly: April 21, 1991 at 9:54 AM Pacific Daylight Time (UTC-0700), which is the date/time stamp on the original HyperCard Stack file for MYST.

The journals that appear in Riven, Exile, and Revelation are dated using an odd sort of shorthand that doesn't seem to match up to the actual surface dates of the events. However, this is due to the way in which D'ni dates (written in base 25) were converted to our numeric system of base 10. Here's how it works:

These dates are given in year.month.day form. For example, Gehn's journal in Riven states that Catherine arrived on "86.9.29", which is Leevotar 29, 9461 (surface date March 15, 1806). However, the year part of the date is in shorthand form, much as we surface dwellers might write "04" instead of "2004", leaving off the century part of the year.