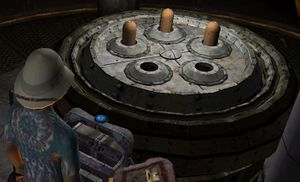 An Er'cana pellet is a hyper-condensed cylinder of minerals and nutrients that once dropped into the lake serves as food for the bioluminescent algae in the Cavern. Before the Fall, Kadish served as the engineer behind the construction of the Er'cana complex responsible for manufacturing these specific pellets.[1] The ovens in Er'cana are equipped with an at-hand linking book to a silo in the industrial district of Uran.

Although the chemical content of the pellet is unknown, their effect on the algae is immediately visible when dropped into the lake water. The effect varies according to the 'recipe' used to 'cook' the pellets, which determines how beneficial the pellet is to the lake algae. The ideal reaction is a deep, orange glow that radiates outward through the water. Other reactions include a bright, white glow, bubbles, steam, or no reaction at all. Certain recipes can even produce 'exploders', pellets that explode when they hit the water.

Explorers accumulate "pellet points" in their KI for each pellet dropped into the lake. More points are awarded for higher quality pellets. Pellets that explode and damage the algae receive no points. A meter in the silo provides feedback on such quality. Victor Laxman further modified the imagers in Cavern neighborhoods to accept and display pellet point counts to generate productive competition between hoods.[2] Roughly 1/6 of the points are given to the lake total, the rest goes to the KI score.[3]