Difference between revisions of "Star Fissure" 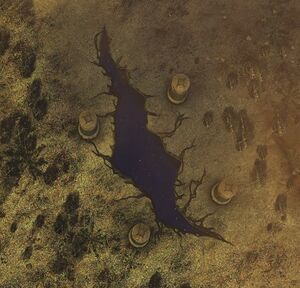 The Fissure that temporarily appears in Relto.

The Star Fissure is an anomaly originally found in Riven. It is essentially a tear in reality that serves as a bridge between Ages, though the mechanism by which it works is not yet understood. It appears as a small crack in the ground, within which is an endless expanse of stars. Unlike space, the Fissure appears to be hospitable to life, as both the Stranger and explorers have passed through it unharmed.

The Fissure originally appeared after Catherine made a series of changes to the Riven Descriptive Book that would intentionally destabilize the Age while she and Atrus executed their plans to trap Gehn there permanently. However, even Catherine is unsure of how or why the Star Fissure actually manifested. She and Atrus made no real attempts to explain it, only saying that it was from the Maker himself.

Yeesha has used the Fissure to connect Relto back to Earth in a similar fashion. As explorers complete her first Journey, the ground between the four linking pedestals on Relto begins to crack and crumble. When all four bahro pillars are transferred to D'ni, the ground splits open, revealing the Star Fissure below. Notably, the shape of this fissure is identical to the one that originally appeared in Riven.

The Fissure as it appeared in Riven was connected to Earth. There is evidence of Riven's final cataclysmic collapse—including Gehn's telescope and a wahrk skeleton—strewn about the New Mexico desert in an area surrounding the Cleft. It is likely that when Atrus intentionally dropped his Myst Linking Book into the Fissure during his escape from Riven, it also appeared in this area.

Explorers have reported that they are linked back to Relto after jumping into the void beneath the "blue" bahro caves, suggesting that the Fissure may have multiple possible exit points.