The Rivenese people are the native inhabitants of the age of Riven, enslaved by Gehn. Atrus's wife, Katran is Rivenese.

Rivenese visually seem identical to humans from Earth, especially having some Asian-Polynesian facial characteristics, and being slightly darker than D'ni or Caucasians.

Rivenese seem not to have the same lifespan as the D'ni; Atrus once noticed aging on Catherine that surpassed his. However they seem to age slower than humans: Katran still appeared quite young to human standards even while her sons were 30 years old. Furthermore she could give birth to Yeesha (and still look quite young) even ten years later.

The people of Riven appear to have been primarily a fishing-and-gardening culture. Little is known about their society or lifestyle prior to Gehn's writing of the Riven Descriptive Book, although it is possible (based on the evidence available) to speculate that they may have been a single community, originally numbering no more than several hundred, dwelling in a single village under an egalitarian or "big-man" system of government [1].

The Rivenese people live in relative harmony with their Age, residing in round, earthen huts mounted into the lagoon walls of Jungle Island. The village is an intricate system of interconnected platforms, bridges and ladders, each leading up to the small, elaborately decorated doors affixed to the side or base of the huts. While not necessarily an innate trait of the Rivenese people, they're considerably reserved and wary of outsiders - not surprising considering Gehn's wrath and the recent actions of the Moiety - and will do their best to avoid interaction.

The Rivenese people have several viable food sources available in the age, including fruits from the jungle and the meat of the webber fish. While dried webbers found hanging next to large fishing nets are the only meat seen in the village, it also seems probable that the natives would have hunted other animals on the island as well. The sunners are the villagers' main source of meat.[2] This explains why they are so skittish when approaching them too hastily. It is also believed that the meat found in oven near the village is indeed sunner meat.

The Rivenese religion before Gehn's arrival is considered to be primitive. The Moiety stone slabs depicting stylized animals seem to indicate that they originally revered all fauna of Riven. Whatever the case, it is known they held special fear and respect for the wahrk, the largest and fiercest of the animals known; and it's possible that it was somehow deified. Gehn took advantage from this and used wahrk symbolism in his decorations.

Gehn presented himself as a god. He also invented  releStEok gen, the Laws of Gehn, three tenets for his religion:

Gehn on his attempts to reconstruct the D'ni civilization, created his own Guild system on Riven, its members copyists who he was beginning to teach the basics of the Art. After he was betrayed by Catherine and trapped on Riven, he reorganized this system into five guilds: Bookmakers, Builders, Educators, Maintainers, and Surveyors. 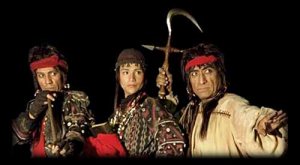 Several key members of the Moiety.

The Rivenese not loyal to Gehn are known collectively as the Black Moiety or just Moiety. A constant undercurrent of rebellion, the Moiety do their best to undermine Gehn's work and shun those who don't actively stand beside them.

The Moiety were born out of the experience of a couple of villagers at witnessing the confrontation at the Star Fissure between Gehn and Atrus. Although members of a primitive culture, they were able to discern the basic gist of the event, as well as adding their own twist to the story. They came to the conclusion that 1. Gehn was a false God, 2. Atrus, having defeated Gehn was a true God, and 3. Catherine, having been chosen by Atrus as his wife, was the Rivenese Messiah, born from the cradle of Riven to lead her people to a new world, post the defeat of Gehn.

Surprisingly, this last assumption came to be somewhat true. During Catherine's return and entrapment on Riven, she wrote a new Age for the Moiety from a discarded, half finished book of Gehn's which she named Tay, where the Moiety built a new home.