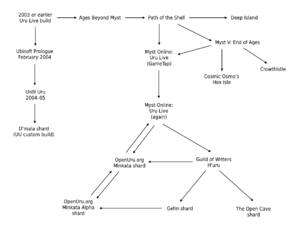 A shard is an array of one or several game servers to support one instance of Uru Live. Shards do not communicate with each other; indeed, explorers end up on completely separate instances of ages, unable to see or send messages to each other.

During Prologue, three shards were created; first Atrus, then Katran, and finally, following the Clerical Error and the cancellation of Rehearsal, Achenar (using what used to be Rehearsal's hardware). Explorers frequently registered KI numbers on all three shards, and communicated outside the game to meet on one particular shard so they could actually meet each other in game.

In Untìl Uru, administrators unrelated to Cyan got to create their own shards[1][2] and configure them to their liking, including such details as what areas of the City are accessible. The auth(entication) server, however, had remained Cyan's throughout. Particularly popular shards included Slacker's and Tapestry.

In early 2006, Cyan created their own Untìl Uru shard, D'mala, as a precursor to their attempt at reviving Uru Live itself, which ultimately led to Myst Online: Uru Live.

From Nuru until the cancellation and eventual reopening of Uru Live in 2010, no fan-managed shards were officially allowed.

After the client (CWE) was made open source on April 6, 2011,[3] a number of shards not managed by Cyan opened. Some of the most notable ones are: