The Vault on Kadish Tolesa was built by Guildmaster Kadish to serve as a secure place to store his worldly possessions. He locked it with many puzzles, all of which have clues in Kadish Gallery. The first four puzzles merely block access to the chamber in which the Vault is located; the last puzzle unlocks the vault itself, revealing a massive collection of gold, tapestries, and other valuables belonging to the former Guild Master, as well as the remains of Kadish himself.

Kadish followed the teachings of King Naygen, who decreed that all good citizens should cling to their fortunes, preserving them for future generations. When the Fall came, Kadish locked himself in his vault. He remained there, refusing to return to D'ni despite having a link back to his Gallery shop with him. He left behind a letter stating that he would rather die with all his possessions than with nothing. There is some debate as to whether Kadish had a last-minute change of heart—or desperation—as his body is positioned as if reaching for the Gallery Linking Book. 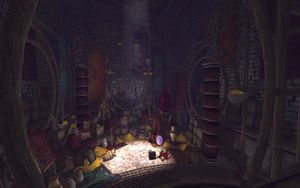 The interior of the vault

Explorers who complete Yeesha's Path of the Shell will hear her say that "his body no longer lies in the vault." While at first this appears to be an inaccurate statement, further exploration of the vault reveals a new Linking Book to the left of the door (when entering) on the upper ledge. This Book links to some other version of Kadish's vault (sometimes referred to by explorers as the "Alt Vault") where Kadish's body is indeed gone, along with almost everything else. This alternate vault has some other subtle differences, including a different opening mechanism on the door. These differences suggest that it is an alternate instance in some parallel reality, rather than an example of Yeesha possessing "true" time travel abilities that could alter history in our own timeline.