Kadish Tolesa is the personal Age of Kadish, a former guild master in the Guild of Writers. It served as both his estate and as a massive combination lock for a vault containing a vast quantity of material wealth.

Gigantic trees dominate the landscape of this Age, so much so that they have grown together into solid walls. The trees' expansion also encroached on Kadish's estate, damaging many of its structures. The explorable area of the Age is located high up in the trees; in one area there is an overlook that provides a view beyond the trees, and no ground is visible from that vantage point. There is a twilight hue to the air, casting everything in shades of purple and blue. 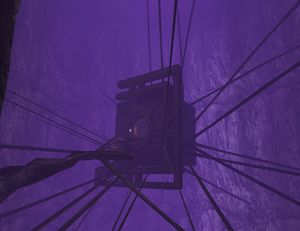 Kadish wrote this Age shortly before the fall of D'ni. DRC estimates place its writing no more than 10 years earlier, around 9390 DE[1]. He was an adherent to the teachings of King Naygen, who encouraged his citizens pursue material wealth and had a secret puzzle chamber built into the Guild Council's chambers when it was renovated during his reign. Following in Naygen's footsteps, Kadish constructed a lengthy and elaborate series of puzzles in Kadish Tolesa to secure his personal vault of riches. He placed clues to the puzzles' solutions in an art gallery he owned on Ae'gura, hiding them in plain sight.

When D'ni fell, Kadish escaped to his Age and locked himself away in his vault. He stubbornly remained there until his death, leaving behind a note justifying his decision not to return to D'ni.

While the DRC began work on Kadish Tolesa in 2000 CE, it was not approved for release when, in late 2003, Yeesha granted explorers access to the Age as part of the Journey – a series of tasks that ultimately led to explorers freeing a bahro from imprisonment. To this end, a journey door was placed on the wall of the cave where Kadish's vault is located.

The Age was still listed as being at phase 5 of the restoration process when the DRC abandoned the cavern in April of 2004 (it had been scheduled for release in "Q1 2004"). When they returned in 2006, the Age was already widely accessible, and it was not re-listed on the new restoration projects page of their website.