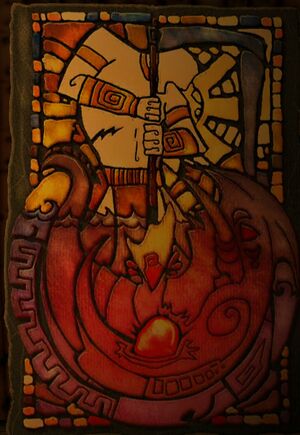 The Kresh [kɾiʃ] are a humanoid race native to the Age of Laki'ahn.

Warriors of this race were hired or induced by the D'ni to fight laki, an aquatic animal, in an arena in order to harvest red gemstones from their bodies. These battles required great courage, as the warrior was armed only with a type of battle axe, and were performed before an appreciative audience of D'ni. The warriors were rewarded for these battles with the meat of their defeated opponents, according to the Prima Official Strategy Guide for Myst V, as the laki were a major food source for the Kresh.

Esher speculates that this race reverted to their former barbarism after the Fall of D'ni.