A bahroglyph is a type of pictographic drawing found in many Ages, as well as in the D'ni cavern. Their creation has been attributed to both Yeesha and the bahro, though their exact origin is unclear. Many of these glyphs depict moments from the history of Atrus's family, while others seem to illustrate other Ages or moments in D'ni history. 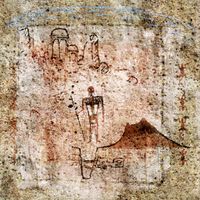 A bahro glyph found near the entrance to D'ni

There are several glyphs located in the small cave underneath the tree in the Cleft. These are generally more straightforward than most of the other glyphs, and glow periodically. These five illustrations depict the Cleft and Volcano, the D'ni cavern, a joint Yeesha-Calam symbol, a spiral or coiled snake, and Yeesha.

A number of glyphs can be found painted onto large rocks dotted around the perimeter of the caldera. Collectively, they depict the events presented in each of the various Myst games and novels. Additional glyphs depict events from more recent history, including Yeesha's own journey to D'ni and the events of the Second Restoration.

A massive bahroglyph carving can be found on a balcony in the upper levels of Bevin and other D'ni neighborhoods. This carving illustrates the Journey, which carries a bahro from their place of exile, through Relto, and into the D'ni cavern.

The largest concentration of bahroglyphs can be found in Eder Kemo. They depict several other Ages which the DRC have sufficiently restored for explorers to visit, as well as others that have not yet been released.

A small collection of glyphs in the slave caves contains a depiction of other slaves, an image of Shroomie, and a spiral cross.

A single glyph, unusually drawn on paper, can be found in the workshop located across the waterfall from Ahnonay's sphere machine. It illustrates the relationship between the upper and lower segments of the Ahnonay/Er'cana bahro cave.

The bahro cave accessed from Ahnonay and Er'cana contain two sets of glyphs. The first, located in the upper section of the cave, provides the measurements needed to make lake pellets that will cause the pool in the lower section of the cave to phosphoresce. The lower section also contains several glyphs, thought to depict Yeesha's journey, which are only visible when the pool at the center of the chamber is illuminated.

Noloben contains a substantial amount of glyphs, as would be expected given the bahro's long history there. One feature among the Age's glyphs is that various symbols map onto numerals.