A bahro cave is a small, self-contained round stone chamber, accessed either by walking through a Journey door or linking symbol or by linking via a bahro stone.

When in a bahro cave, the KI displays the current age/location as "???" in most cases. However, when looking at the profile of an explorer who is in a bahro cave (for example via the neighbors or buddies list), the actual name age/location of the bahro cave is displayed (usually "D'ni-Rudenna"). 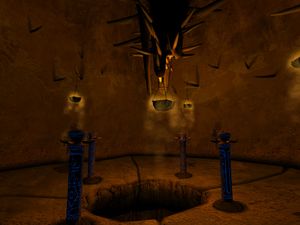 The "orange" cave from the first Journey

This pair of nearly identical bahro caves contains a set of four bahro pillars and is visited as part of Yeesha's first Journey. These caves are often called the "blue" and "orange" caves, based on the color of light emitted by the lamps, which is the most visible difference between the two caves.

The floor of each cave is a stone plate divided into four quarters, with a round hole in the middle. Each quarter of the cave corresponds to one of the four Journey doors and holds one of the four pillars. These quarters of the floor can retract into the wall—when an explorer links into the cave through a Journey door, the platform in the corresponding corner of the cave is extended, and all other platforms are retracted. As it is impossible to stand on the retracted parts of the floor, this prevents jumping from one platform to another.

On the wall next to each pillar are two touchable symbols. The first symbol is a hand symbol, like that found on journey cloths, and is used to transport the bahro pillar from the cave to the explorer's Relto, or vice versa. The second symbol is Yeesha's symbol and a bahro drawing of her, which plays a speech from Yeesha about the corresponding age and the journey.

Inside these caves, the explorer's Relto book does not work—the linking panel only shows gray clouds and cannot be touched. An explorer can only leave the cave by jumping off the edge of the platform into the space below. After falling for long enough, the explorer is linked back to their Relto. The "blue" cave is located above what appears to be the Star Fissure, while the "orange" cave is located above the D'ni Cavern. According to the KI, both caves are located in D'ni-Rudenna.

The "blue" cave is the first cave visited by explorers taking Yeesha's Journey and initially holds the four bahro pillars. As part of the journey, explorers must link to each corner of the cave through the four journey doors and transport the four bahro pillars to their Relto. Once this is done, the the Journey doors change their destinations to the "orange" cave. At this point the explorer must enter each journey door again and transport the four pillars from their Relto into the "orange" cave.

Unlike in the "blue" cave, the "orange" cave's platforms stay extended when the explorer leaves the cave and returns through another door, and it is possible to jump between the extended platforms. Once all four pillars are returned, the entire floor is extended, and only the small hole in the middle remains.

Each of the platforms in the caves also has another symbol on the floor. The symbols on the four platforms form a combination that must be entered into the imager in the Cleft at the end of Yeesha's Journey. These symbols are only visible on extended platforms, so the combination is easiest to see once all pillars have been returned. 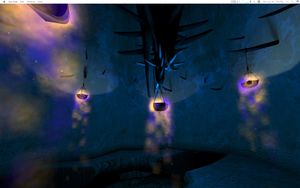 A wedge cave from one of the later Journeys

These four caves are similar to the "blue" pillar cave. Their lamps emit a mix of blue and yellow colors. There is one wedge cave for each of Yeesha's four other journeys, and each cave has one platform per age in that journey. Rather than bahro pillars, these caves contain stone "wedges" for the ages in the journeys. These wedges are also transported to the explorer's Relto by touching a symbol on the wall, but unlike the pillars, they do not need to be transported to another cave.

Like in the "blue" pillar cave, Relto books do not work inside these caves, so the only way to leave is by jumping into the starry expanse below the cave.

According to the KI, all wedge caves are located in D'ni-Rudenna. 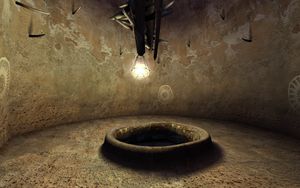 The top level of the pellet cave, accessed from Er'cana

A different form of cave is accessible from bahro stones in Er'cana and Ahnonay. This cave is split into two levels. The upper level—accessed from Er'cana—is brightly lit with a hole in the center, and contains glyphs indicating how to bake lake pellets. The lower level—accessed from Ahnonay—is dark, and contains a pool of water that lake pellets can be dropped into from above. When a properly-prepared pellet is dropped into the pool, it illuminates the walls of the cave, revealing multiple bahro glyphs, as well as a combination for the imager in the Cleft that is used at the end of the Path of the Shell journey.

Unlike the other bahro caves, the pellet cave has no opening at the bottom. The only way to exit this cave is using Relto books, which function normally in this cave.

The KI refers to this cave as "PelletBahroCave". 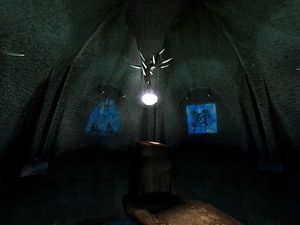 The bahro cave beneath the Cleft

Finally, there is a small cave beneath the Cleft which is often referred to as a bahro cave. The walls are covered with a series of glowing bahro glyphs, and a pedestal in the center of the room contains a page for explorers' Relto books that grants them access to the first Journey.