A neighborhood is a community area, located on the Cavern wall.

Known neighborhoods include Bevin, Kirel and Seret. They differ in their configuration, though the general layout is rather similar. Kirel is a blue, mirrored version of the Bevin style, while Seret shares the same style with Bevin but has different lamp features. Currently, Kirel and many neighborhoods patterned after Bevin are accessible to the explorers in the Cavern.

Another neighborhood, Jenahkai, is known only by name. It has not been visited by explorers or the DRC, and nothing is known about its location or layout. Elonin is a neighborhood discovered by Dulcamara and Ametist.

Many neighborhoods were rather well-preserved from the fall, and have been one of the first major places to become publicly accessible once more by explorers thanks to the DRC's restoration work. 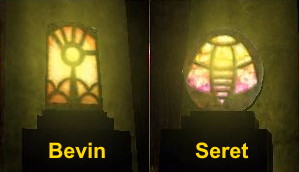 The word "Bevin" is not D'ni for "neighborhood". Explorers have, however, used it as a shorthand term for them (e.g. "the Bevins", or "so-and-so's Bevin"), and there was a period of time during the Third Restoration when the DRC did the same. For many months, all of the accessible neighborhoods were called "Bevins" in the KI interface.

Bevin is also not to be confused with Beginner's Bevin, the neighborhood where Restoration Engineers used to give orientations and provide assistance to new explorers.

More confusion has been caused by the fact that moth-style lamps, believed to distinguish Seret from Bevin, have been appearing in the latter.