Not to be confused with linking panel or gateway image. 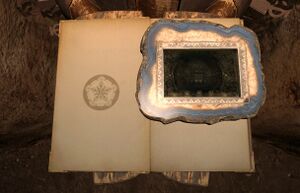 Book window on the Riven linking book in Tay.

The book window was a device created by Catherine to fix Gehn's flawed descriptive and linking books. Placing one on the blank linking panel of an unpowered book would make it visible and functional. It is small enough to be portable and functions entirely on its own, unlike the firemarble domes built by Gehn for the same purpose, which require the golden superdome as a power source.

Book windows were made of a substance (apparently some kind of geode) that Catherine wrote into the Age of Tay. After linking to Tay for the first time, using one of the firemarble domes to power the descriptive book, Catherine manufactured some book windows from the substance and used one of them to link back to Riven. With the remaining book windows that she brought back with her, the Moiety were now able to use books without having to secretly access Gehn's firemarble domes.[1]

One of the book windows was acquired by Gehn from a captured rebel scout; however, because of his low view of the Rivenese, he assumed that Catherine had fabricated the device by following an "explicit D'ni schematic" that she happened to bring to Riven and failed to realize that the material was from another Age.[2]