Tay was an Age that was originally written and discarded by Gehn, but later retrieved and modified by Catherine to serve as a home for the Moiety. After Riven's collapse, it became the home for all the Rivenese people. 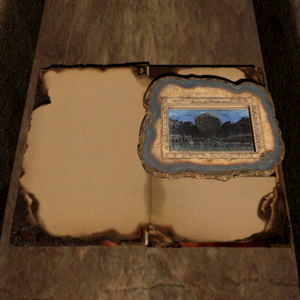 A Tay linking book, partially burnt, based on one of Gehn's failed books. 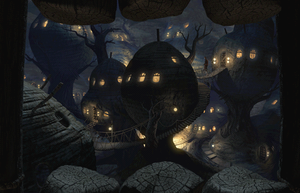 The village inside the Moiety Hive

The age consisted of steep canyon walls encircling a lake. At the center of the lake was a small island where a massive tree stood. The Moiety used the tree as their home, constructing a massive adobe "hive" structure around its branches. The hive contained a number of smaller round adobe structures interwoven with the tree's branches, somewhat reminiscent of the adobe huts in the Rivenese village. 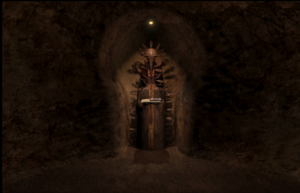 The Effigy of Gehn holding the link back to Riven.

The link-in point was on the shore of the lake near the canyon walls. Those linking to Tay would need a boat to reach the Hive. A cave near the link-in point contained an Effigy of Gehn, which held the link back to Riven in its hands. The effigy was covered in mini-Moiety daggers, each of which symbolized a member of the Moiety who had lost their life to Gehn. It was meant to serve as a warning of the dangers the Moiety would face if they returned to Riven.

The Moiety believed that Catherine was their divine leader who would lead them to paradise. Though Catherine was disquieted by this belief, she loved her people and hoped to bring them to a new Age outside the reach of Gehn. Her opportunity came when the Moiety presented her with a burnt Descriptive Book that the Moiety had recovered from Gehn.

This Descriptive Book was one of many books Gehn wrote in an attempt to successfully write a link to another Age while trapped on Riven. Gehn deemed the book a failure, and had it burned. Upon reading it however, Catherine determined that though the book was not a suitable home for the Moiety, it could be fixed and improved upon with some modifications. She spent some time planning what their new home would look like, and wrote the necessary updates into the book. But the book itself, like the other books manufactured by Gehn would not function without a power source.

To ensure that the Moiety would not have to rely on Gehn's machines to power their books, Catherine wrote a special type of geode into the Age. These geodes, when sliced and placed over the linking panel, would stabilize Gehn's defective Books, powering them just as Gehn's firemarble domes did. Catherine and her rebel allies managed to sneak into one of the firemarble domes to power the link for its first use, allowing Catherine to travel to Tay, obtain one of the geodes, and use it to stabilize her link back to Riven.

Catherine believed that in order to truly protect the Moiety, they should remove the Tay linking book from Riven. The Moiety were reluctant to do so however, as it would effectively sever their ties to the rest of the Rivenese people permanently. Instead, they hid the Tay book inside a complicated puzzle inside the caves on Riven that were once their hideout.

Just before Riven's final collapse, Catherine and the Moiety transported the rest of the Rivenese people to Tay. They lived peacefully there, and Catherine remained in contact with them for many years after. She also seemed to be in the habit of bringing Yeesha there to visit as well, as she does so following the unfortunate events that transpired during Myst IV: Revelation.