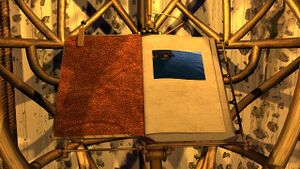 The Voltaic linking book, open to the linking panel.

D'ni Books appear fairly ordinary, but are specially constructed to transport a user to another world, or Age in D'ni parlance. The method for creating D'ni Books was a closely guarded secret, dating back to the discovery of the Art on Garternay. The D'ni based their entire culture and industry around the Art, and the Ages they could access through their books.

D'ni Descriptive Books feature a complete description of the Age. A Descriptive Book must be written first in order to establish a link. D'ni Linking Books are smaller and usually contain references to the Descriptive Book. All books however have the same basic features. They are usually leather bound, and feature a Linking Panel on one of the pages. Touching the linking panel will transport the user (and anything they are carrying) to the Age.

The linking panel is a rectangular "window" which shows a visual depiction of the Age to which the Book links. They can be located anywhere in the Book, but are typically found at the beginning for ease of access. Some Books, like those used in the Nexus, have a panel in the middle of the Book, possibly to facilitate more even wear on the Book's spine over many openings and closings.

Contrary to evidence in the Myst games, sound cannot travel through a linking panel, nor can someone on the other side see "out" of the panel as though it were a floating window.

The image in the linking panel is referred to as the "gateway image". This image is often moving, though the way it moves is not universal, and some images don't move at all. In some, the image's viewpoint orbits around the link-in location, while in others it flies through the surrounding area in a loop. Some images go through a fly-by before settling into an orbit, or even coming to a complete rest. If an Age or Link becomes unstable, the gateway image can degrade in clarity. The gateway image on Riven's Descriptive Book became distorted as the Age's collapse became imminent. A book that has been damaged, such as by missing a page, may also have a distorted or blank gateway image. 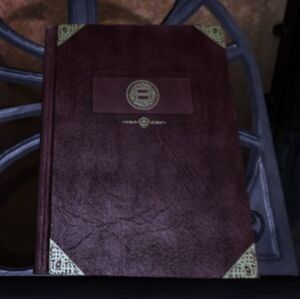 A Descriptive Book is where a Writer fully describes the Age to which they wish to link. These volumes are typically very large, with a considerable number of pages, suitable for the extensive descriptions needed to craft a stable link. There can only ever be one Descriptive Book for an Age. Because regestoy is capable of accessing the infinite possibilities of the quantum mechanical multiverse, it is highly improbably (though not strictly impossible) for two Descriptive Books to ever link to the same Age, even if their descriptions match exactly.[1][2] There are always too many variables left undefined to guarantee that a link is forged to the same place twice.

While an Age can have only one Descriptive Book, an unlimited number of Linking Books can be written for an Age. Since Linking Books are smaller and more portable, and the destruction of a Linking Book doesn't affect the Age, Linking Books were the more commonly encountered books in D'ni.

The term Linking Book has become something of a catch-all for any kind of Book. This can lead to some confusion when trying to interpret historical accounts, as it is sometimes unclear whether the object being described is a Linking Book or a Descriptive Book.

Books were made from specially-formulated paper, using a recipe that was closely guarded by the Guild of Books. This paper was then bound into a hardcover leather volume using another special process, creating a blank Book, or kor'nea (Kor'nEa). These Books were then given to the Guild of Writers, who used them in regestoy—the Art of writing Ages.

The ink used to write Books was also special, and its formula was held by the Guild of Ink-Makers. The complete ingredient list is unknown, but there is evidence to suggest that one of them was crushed scarab beetles.

The precise processes for manufacturing Books is currently unknown to humanity, despite years of research by the D'ni Restoration Council. However, the practice does still survive on Releeshahn, amongst those D'ni who survived the destruction of their civilization.

A tale describing how Books were first invented appears in the canceled Myst comic books—specifically, Myst: The Book of the Black Ships issue 0. In it, a D'ni Guild Master named Varsil developed them to solve a famine that had ravaged the D'ni people for two generations. This story has been declared apocryphal by RAWA,[4] as it conflicts in many ways with established D'ni history.

The games Myst and Riven depict a special type of Book called a Trap Book. Atrus describes these Books as ones where the link is partially severed, causing the user to become trapped in limbo between Ages. If another person uses the Book, the original user is displaced back into the originating Age, and the new user becomes trapped. The Red and Blue Books (Spire and Haven) in Myst and the Book used to capture Gehn in Riven are all Trap Books. However, this kind of Book does not actually exist.

In a 2000 email to the Riven Lyst community email listgroup, RAWA explains that Trap Books were an invention that Cyan developed in order to simplify the gameplay of the first two games in the series. Historically, these would all have been prison Ages—Ages with no Linking Books in them—and the Stranger would have needed to rely on other kinds of information to successfully complete the tasks of freeing Atrus from his prison on K'veer in Myst, and trapping Gehn in a similar prison in Riven. Indeed, Myst IV: Revelation abandons the Trap Book notion entirely, and fully fleshes out the appearance of the Ages in which Sirrus and Achenar were imprisoned for almost 20 years.