The Selenitic Age was an uninhabited Age written by Atrus during the time that he and his family lived on Myst.

Selenitic is a barren, desolate landscape, scarred by a number of meteor impacts. At the Age's link-in point, Atrus constructed a replica of the "place of protection" rocket ship that housed the Selenitic descriptive Book on Myst. This off-shore location is connected to the mainland by a brick and stone bridge. A pathway runs from this bridge all the way around the island, with branches leading off to various places of interest. Each location is the source of a unique sound, which is captured by a microphone and relayed to a nearby transmitter.

The first branch off of the path to a small oasis and freshwater spring — the only place on the island that wasn't impacted by the meteor storm that Atrus encountered on his first night there. Across the path from the oasis, a locked door — secured by a sound-based slider combination lock — provides access to an extensive cave system. Nearby, another branch travels up to a brick walkway overlooking a lava-filled chasm, which was opened up by the meteor impacts. Just past this point, the path turns right to follow the shore of a massive circular lake, created by the largest of the meteor impacts. It passes a broken-down clock tower before once again branching off into a small copse of crystalline spires. The wind blowing through these spires creates a haunting, dissonant whistling sound akin to a set of pan pipes. At the far limb of the crater lake, a well dives down to a tunnel beneath the lake bed, where a second well provides access to an uplift of rock in the center of the lake. A tower constructed on this rock contains six parabolic dishes that act as receivers for the audio transmitters around the island. When each receiver is properly aligned with its associated transmitter, the equipment at the base of the tower will provide the correct sequence of sounds necessary to unlock the door leading to the Age's cave system.

Atrus built a large network of railways through Selenitic's caves, which he navigated using a machine called the mazerunner. The caves also house the linking Book back to Myst, which can only be accessed by successfully navigating the rail network. Like much of the equipment above-ground, the mazerunner uses audio cues to direct its driver in the correct cardinal direction. While these cues are the same as the ones Atrus used to indicate the direction the fortress was facing in the Mechanical Age, the maze is restrictive enough at the beginning that all of the necessary directional cues can be deduced without ever setting foot in Mechanical. 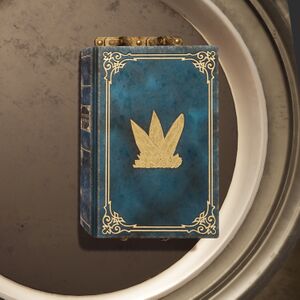 Selenitic's appearance as of its depiction in Myst is drastically different from the way it looked when Atrus first visited the Age. He described it during his first visit as being covered in grass and trees. During that visit, however, the island was pummeled by a meteor storm which dramatically reshaped the island and scoured much of its plant life. Atrus fled back to Myst during the storm, and only returned several months later to find the island completely transformed. The meteor impacts had obliterated most of the landscape, including a large lake that had previously been located where the much larger crater lake now sits. The impacts also tore open a fissure above a subsurface magma chamber, and exposed a large cave system nearby.

It is unclear why Atrus built so much infrastructure on this Age. While the mazerunner was clearly constructed as part of his efforts to explore the underground, the reasoning behind the complex locking mechanism securing the doorway to the cave system is unknown. Atrus observed in his journal for the Age that many of the notes documenting his construction efforts seem to have mysteriously erased themselves. In the absence of his dedicated construction journal, there is no way to know why he felt such a security system was necessary.