For the game by Cyan, see Myst (game).

Myst was the family Age of Atrus and Catherine. They lived there with Atrus's grandmother, Ti'ana, as well as their two sons, Sirrus and Achenar. The Age was written by Ti'ana as a safe place where her grandson and Catherine could escape from his father, Gehn. While they ultimately trapped Gehn on the Age of Riven, a Linking Book back to Myst was lost in the Star Fissure during their escape. This lost book worried Atrus, and over the years he reshaped the island with new structures to secure his Ages from whoever may one day arrive through it.

The island is shaped roughly like an arrowhead, and is dotted with numerous buildings that serve as "places of protection" for Atrus's various Ages. On the northern end, a mountain serves as an observatory point, where the access keys for these places of protection can be found. At the foot of the mountain is the library, and a planetarium which features the stars visible on Stoneship. A pine forest covers the central and southern areas of the island. A log cabin in this area controls the tree-shaped elevator that accesses Channelwood, and a collection of pillars surrounding a raised reflecting pool cut a path through the middle of the trees. From there, the terrain slopes down to a sandy beach at the southernmost tip. A clock tower stands just off shore, accessible by a gear-shaped bridge which can be raised and lowered. There is a dock on the eastern shore, with a sunken ship containing the link to Stoneship moored beside it. A tunnel leads from the dock into a fore-chamber beneath the island, where a holographic imager can be found. North of the dock, on the northeastern corner of the island, is a wide platform fitted with enormous gears, which house the link to the Mechanical Age. A 1950s-era "Buck Rogers"-style rocketship lays on its side off the northwestern shore. When properly powered by generators buried in a cave beneath the western shore, this ship provides access to the Selenitic Age.

The living quarters for Atrus and his family are not shown in any of the Myst games, and according to RAWA, the island seen in the games is smaller in size and complexity than the real place. Other places of protection, and non-essential areas like the family's living space, were reportedly removed.

As of 2005, the Age is in a dilapidated state, having been abandoned for many years. The grasses are overgrown, the pine trees appear to be dying, the buildings have begun to crumble, and much of the machinery no longer works. 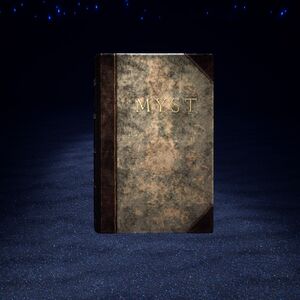 When Atrus and Catherine decided to trap Gehn on Riven to prevent him from continuing his misguided and misinformed quest to rebuild the D'ni empire, they needed a safe place to plan their actions. Catherine presented Atrus with Myst, implying that she had written it for them to use. In fact, it had been written by Ti'ana, who was helping Catherine without Atrus's knowledge. Once Gehn was defeated, the three settled on the Age, and Atrus and Catherine began to raise a family. At some point, Ti'ana died after visiting one of Catherine's Ages—though the cause of her death and whether it was actually related to the visit are unclear—and was buried among the pine trees behind the cabin.

After his grandmother's death, Atrus threw himself into his work, writing new Ages and building new structures to protect them from potential interlopers. He also wrote two "trap books"—prison Ages with no links back to Myst—which he placed in the library, and warned Sirrus and Achenar never to use. As his sons grew up, they gained unchecked access to Atrus's Ages, and began to covet their wealth. They ultimately stripped and destroyed many of the Ages, and concocted a plan to get their parents out of the way long enough to let them visit the prison Ages - not knowing their true purpose.

For several months, the island stood empty, all of its inhabitants trapped in other Ages, unable to return. Then, a stranger arrived from Earth through the Linking Book lost in the Star Fissure during Gehn's imprisonment on Riven. This stranger helped free Atrus from the trap his sons had set for him, and later helped to rescue Catherine from Riven, where she herself had been trapped by Sirrus and Achenar's plan. After this, Atrus and Catherine felt that they could no longer live on Myst due to the painful memories now associated with it. They abandoned the Age for a new home on Chroma'agana, and it has sat largely abandoned since then.

In 2004 CE, Atrus's daughter Yeesha gave explorers access to the Age, though only the central library chamber is now accessible. Yeesha seems to have inherited her parents feelings regarding the island, referring to it as a "cursed place" and refusing to set foot there. This figured prominently into the events surrounding the release of the Bahro in 2005 CE: hoping to acquire the Tablet for himself, D'ni native Esher attempted to lure the Tablet-bearer to Myst, a location where Yeesha would not interfere. His scheme was ultimately unsuccessful, however; Dr. Watson used the Tablet to free the Bahro, and they imprisoned Esher for what he had done to them on Noloben.