The Spy Room consists of a small space that almost seems etched from the Cavern wall, but is in fact a closed-off room in the Tokotah II building in Ae'gura. This room looks across Tokotah Alley onto the Tokotah I building, where the DRC used to hold their meetings during the 1997-2004 restoration effort. 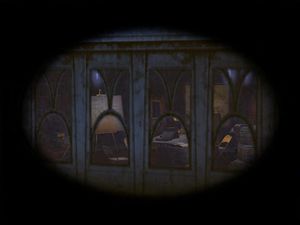