(Redirected from The Cleft) 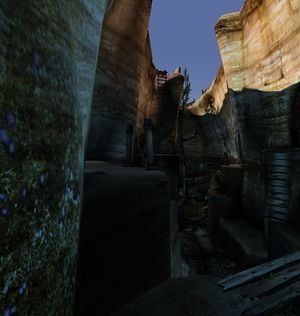 View along the Cleft, from its volcano-side end.

The Cleft is a natural crack in the earth near the Volcano in the New Mexico desert, on the property of Jeff Zandi. According to the Book of Atrus, it is roughly eighty feet long, fifteen feet wide, and thirty feet deep, though its appearance in Uru seems to contradict those figures slightly.

At one time, the Cleft served as a way-point on the journey from the Lodge to the nearest city (Tadjinar, according to Book of Ti'ana). Anna and her father would often stay there on their way to or from the city. After the Fall of D'ni, Anna and Gehn took up residence in the Cleft, but Gehn left in his late teens, feeling a serious disdain for both his mother and the conditions in which he was living.

After Gehn abandoned Atrus as a baby, Anna cared for him and raised him in the Cleft. Atrus's mother, Keta, is buried here as well.

The Cleft was largely abandoned after Atrus was taken back to D'ni by Gehn, and Anna followed them down. Apparently Atrus kept a number of his Ages there, along with a collection of tools, but there is little record of the Cleft being used for much else. In recent years, Jeff Zandi has been found camping outside of it, welcoming anyone who felt "called" to the location. Yeesha had apparently made use of the Cleft in times past as well, and her remaining message to visitors guides them on their Journey into D'ni.

According to RAWA, the Cleft is located a small number of miles away from Tomahna, the home which Atrus and Catherine established for themselves almost 200 years ago.